Exploding out of Zambia in the early seventies, 'Zamrock' fused traditional Zambian folk with Western psychedelic rock, disco and blues, producing some of the most electrifying afro-psychedelia ever recorded.

After finally becoming independent from British colonial rule in 1964, musicians in Zambia became increasingly inspired by the sounds and spiritual ideals of the western music scene. The acid rock guitar of Hendrix, the funk of James Brown and the searing blues of B.B King were all popular across Zambia, which also had its own rich musical legacy in Zambian rhythms, ritual and folk music. These new sounds and ideas begun to fuse with traditional Zambian music, creating a unique and powerful interpretation of afro-psychedelia that would become known as Zamrock...

After half a century of colonial rule, the British ruling class had pressured Zambia’s separate kingdoms into a centrally ruled nation. National change on such a huge scale would destabilize the country, with key industries surviving in the mining and oil districts. An influx of migration was then caused into the surrounding cities, wherein a diversity of eastern and western artistic themes were able to freely intertwine.

Musicians in such areas were immersed in an eclectic fusion of styles and sounds. Traditional instruments such as the high-pitched “talking” Vimbuzza (percussion, used in healing ceremonies) and the Kalimba (hand piano) began to be accompanied by modern western instruments such as the accordion and the electric guitar, brought over by the British.

In 1964, Zambia declared its independence and a national radio station, Zambia Broadcasting Service(ZBS) was formed soon after, as part of a state drive to focus upon nurturing the homegrown music scene. The country's first president, Dr. Kenneth Kaunda passed legislation stating that at least 95% of music played on the radio must have originated in Zambia.

These concerted efforts to produce a uniquely Zambian musical presence ironically created the perfect breeding ground for some of the most distinctive Afro-Western fusion styles. British bands in particular such as The Beatles, The Who, Led Zeppelin and The Rolling Stones were extremely popular throughout the sixties and seventies, specifically in a large mining area at the heart of Zambia known as 'the Copperbelt,' and in capital city Lusaka.

However, in 73' an oil crisis would trigger a harsh recession and this economic tension challenged Zambia's newfound freedom of identity. This friction was somewhat at contrast to the unity independence had brought, in helping Zambia heal and become, as President Kaunda's slogan captured: 'One Zambia, One Nation.'

This duality provoked a powerful response from musicians with the early seventies seeing a number of bands form.

Here is an Introduction to the Zamrock sound from W.I.T.C.H...

W.I.T.C.H (an acronym for 'We Intend To Cause Havoc') were one of the first Zamrock groups to come about. Charismatic lead singer Emmanuel Chanda was often known as 'Jagari' (an africanisation of Mick Jagger's name) due to their frequent use of Rolling Stones inspired rock riffs, with funk lead guitar layered over homegrown kalindula rhythms.

Wings of Africa (1975) captured the first, less than tentative explorations of the band Musi-O-Tunya, and their ability to handle complex traditional Zambian rhythms and seamlessly fuse them with deep funk and psychedelic rock influences. Leading the group was Zamrock legend Ricki Ilionga who released a number of solo recordings including 'Dark Sunrise'...

"For those who don't know Africa much, we were not living in isolation here. The hippie time, flowers, love... and everything, Woodstock! We were a part of that culture too." - Ricki Ilionga (Musi-O-Tunya)

At home, the Zamrockers themselves were (as Ilionga describes) considered hippies and eccentrics. One supposed legendary gig by Amanaz (an acronym for "Ask Me About Nice Artistes In Zambia") in 1974, reportedly saw the lead singer jumping out of a coffin wearing a skeleton suit with flared trousers.

Amanaz would only release a single recording together, Africa (1975). The album captures a soulful, Zambian folk sound particularly in 'Khala my Friend' and 'Sunday Morning.' 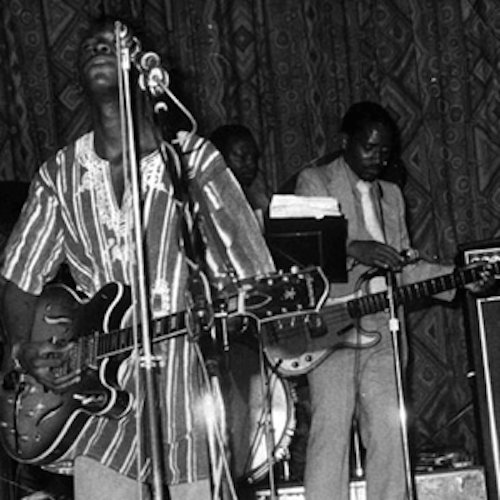 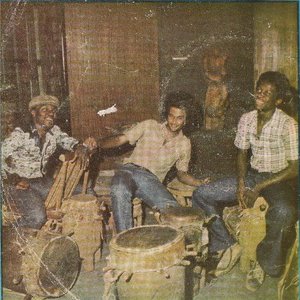 The music often also explored wider political tensions felt across Africa and the rest of the world. 'Black Power' (1975) by the band Peace is a powerful example of this. Driven by an intermittent shimmering wah-wah guitar line and underpinned by prog-rock chord progressions, come lyrics charged with resistance and perception.

"We began to think, well the culture is part of us. we were not politicians of any class, it's just that we thought in music we could change that political tone so that it becomes a social tone." - Isaac Mpofu (Amanaz)

The band 5 Revolutions released the album Im a Free Man in1976, another vibrant exposition of the Zamrock sound. In '78, Fireballs released Dots, showcasing an increasingly disco and funk influenced fusion. Track B2 'You Can Fool No One' captures this, also throwing into the mix a searingly jazzy saxophone solo....

The Zambian economy collapsed in the late 70’s, provoking increasing government authoritarianism. Coupled with the numerous wars being fought on all sides by neighbouring countries, Zambia was left vulnerable. After a national curfew was announced, many of the great Zamrock groups were forced to play daytime shows at extortionate (taxed) prices and by the eighties, Zamrock was fading away.

When the AIDS epidemic ravaged the country there was little to no medical knowledge and extremely scarce support facilities, many musicians died. The rest left the music industry altogether, to find other work to sustain themselves and their families. Jagari became a teacher, and then a copper miner.

After Jagari's departure, W.I.T.C.H would release Kuomboka (1984) a disco-funk-reggae fusion album, (featuring a number of different lead vocalists in Jagari's place) a brief hint as to what Zamrock may have evolved into over time were it not so quickly swept away.

In recent years Zamrock has seen a small revival, in part due to the work of Egon Alapatt (Now-Again Records) who worked extensively collecting old recordings and compiling reissue editions. This would bring him into contact with Jagari Chanda, one of the few still surviving members of the Zamrock scene. The two gave a number of lectures on the History of Zamrock together.

Egon ventured that the unique nature of Zamrock lay somewhere in:

“Zambia gain[ing] its independence almost without [serious physical] violence... Compared with many of the neighboring countries, Zambia was – in the early ’70s – a nice place to live: Poor, but peaceful. That’s the reason something like the Zamrock scene could arise.” - Egon

Zamrock as a genre grew up almost alongside the countries independent identity, at a time of Zambian unity in the face of the British colonial legacy.

It represented the vibrant intensity of Zambian culture during the seventies and produced some of the most powerful, honest and funky afro-psychedelia ever recorded. This is a brief tribute to its legacy.

Check out this intro to Zamrock in documentary from Vinyl Me, Please: